Dr Adele Morrison, a user of the ACCESS suite of models, has won the 2022 Malcolm McIntosh Prize for Physical Scientist of the Year. The award recognises her research on the Earth’s complex system of ocean circulation and its impact on rising sea levels and climate.

Dr Morrison, a physical oceanographer, uses innovative methods to model Southern Ocean circulation. Her high-resolution modelling examines how the changing ocean impacts the rate Antarctic ice sheets are melting and their contribution to sea-level rise. The findings will help Australia guard against the future impacts of climate change. 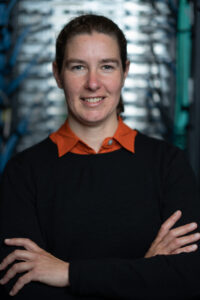 “My work using high-resolution modelling has helped us to unravel the complex dynamics of upwelling circulation in the Southern Ocean and how it will respond to climate change,” Dr Morrison said.

“To receive the Malcom Macintosh Prize for Physical Scientist of the Year is an amazing honour and a great opportunity to raise awareness of important issues like climate change.

ACCESS-NRI Director, Professor Andy Hogg congratulated Dr Morrison for this amazing achievement and said, “Adele has been at the forefront of high-resolution ocean modelling, particularly in the Southern Ocean. She contributed to the development of the current generation ocean sea ice model known as ACCESS-OM2, and her work has highlighted the exceptional performance of the model particularly in the Southern Ocean near Antarctica. She’s also playing a leading role in developing the next-generation ACCESS ocean-sea ice model, incorporating ice shelf cavities into our models and is an active member of our Scientific Advisory Committee.”

“Science has always been a part of my life – from studying physics at university, to teaching mathematics and physics at high school, then coming back to undertake research in oceanography,” Dr Morrison added.

“I hope my work can inspire the next generation of scientists to unravel new discoveries and technologies that limit the impacts of climate change and advance our transition to a zero-emissions world.”

“For me personally, as a parent, I hope I can be a role model to show young women that it is possible to have a wonderful life both inside and outside of science.”